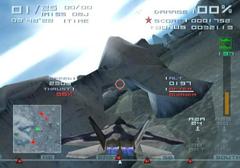 Top Gun Combat Zones is an arcade-style air combat game that also works as a simulator, although the fun part is playing at knocking down enemies from the air.

With this game you will be able to pilot several models of aircrafts and play to shoot your enemies that will come in the form of war fighters, combat helicopters or naval bombers. Everything becomes your objective and your mission is none other than to charge them all and get out of the ambush alive. For this you have numerous weapons and all your ability to react and advance

This trial version will allow you to play the first missions of the game for free.